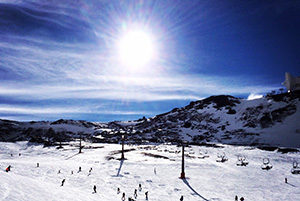 With all those beaches close to La Estrella de Cómpeta you wouldn’t think this would be the place to go to ski or snowboard. But you should. You can ski and snowboard in the mountains of the Sierra Nevada.

With tops of about 3500 meters, the Sierra Neva is the highest chain of European mountains after the Alps. UNESCO named the most part of the Sierra Nevada a Biosphere Reserve. But at the glacier you can ski almost all year long. The Skiing area, which starts at 1000 meters, is named Solynieve (Sun and Snow) and has 35 slopes. When you’re at the highest slopes you can actually see the Mediterranean Sea, which is at about 40 minutes away by car.
For the skiing area you drive in the direction of Granada and from there you follow the signs ‘Sierra Nevada’. For more information go to: www.cetursa.es.